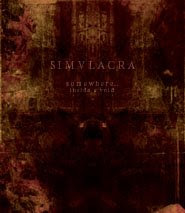 Dismal, ethereal are the key words to describe this album, which through the mind of Miguel Boriau who plays in WEIHAM was developed with the sole purpose to let your being keeps on floating on the void eternally. Sometimes music reminds me a bit to LUSTMORD, but this is a bit more calm, moody. A long 22 minutes track which is a perfect representation of void in which we live, our mind floating through sensations, feelings and thoughts. A minimalistic dark ambient album with not so much variating part, but with a lot of moments of a primigenian dark atmosphere which slowly is going deeper to your brain what you can feel listening the SIMULACRA’s album, full of such dense ambient sounds capes ,all the time moving deeper and deeper. its just a sense of vacuity, a sense of an imaginable void, awaiting for you. A very interesting release from this Belgian artist. the art work is done byVincent Andelmoth & Radunir,the mastermind behind NO ANGELS Prod, and how us a very astonishing art through abstract forms veiled in a dark, somber structure. This Cd comes in a two panel set, with a free picture inside. Just come on and feel the void somewhere through the dismal atmosphere generated by SIMULACRA. 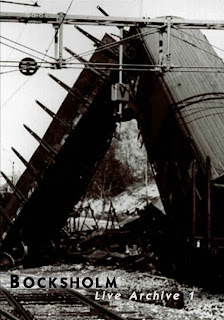 BOCKSHOLM is known as been the primary project on Peter Andersson (Raison D’ Etre) and Lina Baby doll (Deutsch Nepal) existences. So, highly inspired by their natal industrial Swedish town spelled Boxholm… this release has s primordial characteristic that is a collection of live performances of the act through Europe & Usa. Now, let’s go deeper to the music defragmentation developed here. Live in Vilnus Lithuania 6th March 2004 includes 4 compositions through (28:20) in which you can feel the organic delirium and industrial ambient passages floating through the whole spectrum of the tracks, music is full of power due strong beat tunes giving an apocalyptic touch. At some moments voices starts to evoke its respective elements to enrich the whole show with an own strong character, having moments of a dramatic dark depth, the whole tracks have a representation of isolation and dead earth expressionism. So, then comes “Elektrik Swastika Lokomotiv” (end part) live in San Francisco Usa. 24th October 2004 through (4:47) with its chaotic fusion of sounds full of drone and electro elements which arrive to complement a show full of moments of dynamic and bizarre structures. Just imagine both Peter & Lina at stage mesmerizing your mind through such spectrums. So, closing this live archives is a live show in Zurich Switzerland on the 6th of January 2006 (26:25) with two tracks “Elektrik Swastika Lokomotiv “and “Pressbyran 78” both tracks floating on dark ambient atmosphere with some traces of power electronic and arrangements which fits perfectly for a show as the ones presented by BOCKSHOLM.so, this is just a part of a review which will be better to have been the opportunity to watch alive. To explore the visual side and sensations of an act as BOCKSHOLM through stage. So, perhaps someday we will have the opportunity to see BOCKSHOLM here in South America. Or just to travel Europe to watch a show!!! 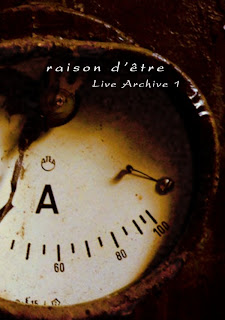 Do you imagine a RAISON D’ ETRE live show and opening with the first 4 tracks of “In Sadness, Silence And Solitude” album? Yes, it was a reality for all the French freaks at Nevers France on 1st June 1996 performing the work “Drop Of Crystal With A Thousand Eyes” through (32:36) “Reflecting In Shadows”, “In Absence Of Light”, “The Well Of Sadness” and “Deep Enshrouded”, developed with the spirit which characterized the RAISON ‘D ETRE albums. Neoclassical religious influences with such dark ambient atmosphere, unique in this genre. Sonic mantras hypnotizing the audience to a point f expanding consciousness through such beautiful dark compositions. Bell sounds announcing the last parade full of isolation and shadowy shapes. “Moulding And Destruction 1 “live in Leipzig, Germany on the 8th June 2005 (7:48) increase the moment of astonishing reality due metal echo sounds floating through a dense desolated atmosphere. And closing is “The Eternal Horizon” live in Neerpelt,Belgium on 4th august 2000 (11:02) continues with such deep voyage to forgotten ruins seducing the listener to explore the misery, desolation of their minds,,,still metal echoes sounds and a dark atmosphere surrounding the whole track.
Well, now let’s go to live archive 2. 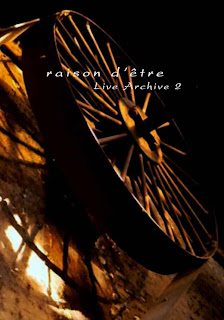 Its time for Bulgarians to explore a world hidden in ashes of desolation. opening wit “The Transformal Landscape” and “The End Of Key” at live Sophia, Bulgaria 16th April 2006 (22:41) .church tolling bells opening again trough deep atmospheres full of sorrow and earthly darkness unravel slowly to ultimate present a more touching and real representation of the beauty and sadness that RAISON D’ ETRE has always revealed in. then,”Metamorphyses IV” live Zurich Switzerland on 6th January 2006.the 4th phase continues mutating itself through organic drone pattens full of abstract sounds and dismal atmospheres. “Moulding The Forlorned” live in Gent Belgium in 7th May 2006, a remote march to dungeons of forgotten realm once buried by the dust of time, carving metal sounds twisting around ethereal atmospheres all the time once again and again. Closing is live in London 28th April 2006 “The Transformal Landscape” and “The End Of The Key”. This release is more than just a collective selection of live performances. Is just a clear representation of how RAISON D’ ETRE has evolved through time. This release is a way to express to those of us whose haven’t the opportunity to presence his live shows to have a clear idea of how RAISON D’ ETRE sounds at stage!!!

…WHERE TATTERED CLOUDS ARE STRANDING
v/a Double Cd 2008
(The Eastern Front)
More than just a double cd compilation, this album is an amazing gathering of artists around the world, paying tribute to the art of Icelandic sculptor Einar Jonsson (1874-1954). 28 dedicated artists sailing in the seas of dark ambient, industrial, neofolk expressionism, adapting all their talented, artistical concepts through diverse compositions, all of them with a very seductive, abrasive sonic atmosphere. This double album is divided into two parts: part I “Grief “And contains acts such as BELBORN,COLD FUSION,STORM OF CAPRICORN,LARRNAKH,WESTWINDWEIHAM,ZEBAOTH,CAWATANA,H.E.R.R/VON THRONST 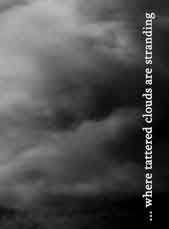 AHL,AELDABORN,KAMMER SIEBEN,HOROLOGIUM,AGNIVOLOK,RUKKANOR. So, for example STORM OF CAPRICORN “come from far and wide” with a militant folk track with an impressive adaptation of sounds and lyrics taken from “volupspa” of the poetic Edda. LARRNAKH “island on island” with perfect development through the whole track full of acoustic guitars and well structured work of vocals. WEIHAM “utlagar” inspired by Einar Jonsson’s and musically very attractive piece of art with excellent work on vocals, and synths ZEBAOTH “drought now” surprises me with an excellent track with militant drumming part and chorus similar to Sophia .a great potential here. CATAWANA “have no option” a beauty, sad, melancholy remembering a past age. The atmosphere generated here is really great. Piano parts, and well done arrangements of vocals and synths. AGNIVOLOK “sculptur” a dense ambient composition, with a characteristic sound having the sensation to be submerged under a dense ocean, so suddenly with some acoustic parts from time to time. There are just some of the acts involved in this great album.Now, let’s go enter to the dungeons of darkness and explore the part II called:”Birth Of Psyche” including acts such as :ARTEFACTUM,HOARFROST,KADAVER/REFUSE TO DIE,ROSE ROVINE ET AMANTI,WACH,SIMULACRA,GANDOLFS GEDANKEN,SHINING VERIL,GREGORIO BARDINI,SITRA AHRA,ECHO WEST ,BISCLAVERET and OBJECT 4… opening is ARTEFACTUM “symbolism” a dense voyage to unknown realms, with twisted work of vocals and a deep, dark insane atmosphere here. Always innovating HOARFROST comes with a track called “insane” based on guitar parts and synths which complements perfectly creating a monumental mixture of melancholic passages. ROSE ROVINE ET AMANTI “violini e rose “sweet ,classical melodies very inspirational and moody, a perfect work of violin as only this great act could performs. GREGORIO BARDINI “cobra” pays homage to Mr. Jonsson with an excellent artisitcal track developed during a live performance at St Andrew church. With calm, beautiful, harmonic atmosphere, through piano, flute, parts which suddenly captures you in extremis. SITRA AHRA “the scorching breath” with an enigmatic ritualistic composition through tribal drumming beats and a well development of vocals in general. this was recorded during ritual performances of the act. A very dark intense track here. BISCLAVERET “engill ljssins”, again this polish duo surprises us with such an indeep, dark explosive composition. Piano parts which are whispers, evoking old passages in time, and also the astonishing vocal of Dragos, which complements perfectly with the atmosphere generated here. One of the best tracks in my opinion. A very interesting release here having a lot acts worth to check. So, just write Igor for more information.
SHAHANAS (Ita)”Over Garden Horizon” CD 2007
(Self Produced)

This Italian project got so much my attention due ideological matters by Victor Emmanuel so, left hand path tantra and occultism were getting more and more my interest. And his music wasn’t the exception. 7 expressive compositions with a high progress from time to time. Opening track is “Prakrti” a beginning with some dark ambient passages which slowly ended transformed into industrial-noise patterns. “Nidra” is a very short ambient exploration with a deeper atmosphere. then comes “Shell Over Garden Horizon” with a very sticking work on guitars and a dense ethereal atmosphere at the whole picture of the track. “Mary Inxtc” is just a classical sad song with moments of a nostalgic mood. “Existence” is a perfect expression through guitars mixed with some minimal atmosphere and spoken vocals which complements perfectly each other. One of the best tracks developed here. “Manthana” another track with interesting moments in how the track has been built. Dark atmospheres surrounding the whole track, with not so much variating parts but still with highlights moments. Finishing its “o” , which is an ambient, industrial track. The important point in this release is that SHAHANAS has a lot of potential .obviously he needs to improve some elements here and there, but really, the music fills the expectatives. A piece of esoteric industrial noise basing in experimental and spiritual rebellion as its principal patterns!!!
Posted by PAN.O.RA.MA audial/visual/Magickal Journal at 07:57