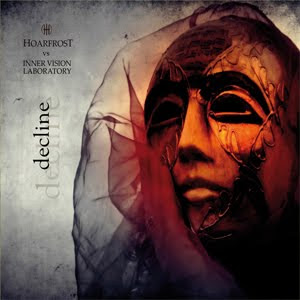 HOARFROST vs INNER VISION LABORATORY(Pol)
"Decline" Digipack 2010
(Zoharum)
Its hust more than exciting to find such kind of releases,having such strong feeling of cooperation,so this process,revelation and defragmentative idea,waere on mind of both projects in order to create something in deep,eclectic and obscure.Revealing different aspects of both of them. Both projects are developed here,just a pert of their creativity in order to handle an in deep voyage to such obscure regions of mind. HOARFROST is a Polish act,emerging in 2006,and since them has been working in such dark ambient industrial musik with so many interesting aspects,due how music has evolved since the very beginning.so while,the other Polish act INNER VISION LABORATORY floating into ambient psycdelic with some industrial touches have been creating effussive and interesting music as well.This time both amazing projects have joined forces to create a very interesting release worth to check.The album includes 8 compositions and a bonus video of the first track "Mind Infinity".The highlights from this album,is the obcure and mutative soundscapes moving and collapsing all the time creating such in deep atmospheres in a very dense and proper way.The album is inspired in two poems"Mad man" and "Modern Icarus"...the album converges in its own dark nature with compositions such as "Do You See Them Too",built into dense atmospheres and eclecting soundcapes evolving from time to time,and including such rhythmic beats and ethnic structures which just fits perfectly with the whole concept of the album. "Behind The Walls",is another piece with full cryptic passages mutating all the time,so sutile sounds ,and piano elements mixed with suggestive industrial patterns and drone elements makes of this track one of the best ones from this album. "Broken Waltz" is just brillant,due how such classical piano elements are covered by such suggestive elements and sounds to amalgame a perfect long trip to such vast obscure regions ofmind,full of nostalgic remembrances and distan past echoes covered by the dust of time. Another track is "Unless You're Dreaming",distan voices,enigmatic drone structures moving in all direction,spoken voices and floating sutile spaces are the main elements which you shall find here.sensations of vacuity,unlimited ago and fracmented realities are the structures you must experience here. "boundless Oblivion" and "A Clear Fuse" are the last tracks both of them with such industrial elements which gives to each track a powerfull charisma and more when the influx of such vast eerie atmospheres,female voices arranged perfectly as mantras to complement the spoken voices added to the track "Boundless Oblivion". The last composition is just amzing beautiful.piano and key board passages bathed by such sublime atmospheres and percussive elements which gives you a clear idea of dynamism and eclectic nature of both projects!! the album comes in a beautiful digipack,and remmber this one includes a bonus video!!! 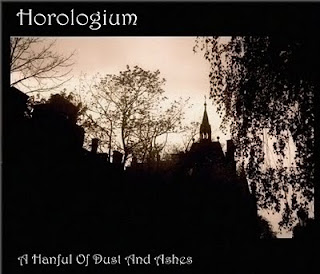 HOROLOGIUM(Pol)
"A Handful Of Dust And Ashes" Digipack
(Zoharum)
Another Polish act with such impressive creativity and spontaneous musicalisationship is what we have the pleasure to review for. so HOROLOGIUM is one of such projects convergin in Ambient/experimental paradigms with a touch of industrilish edge,giving to the project a more raw sound at moments.HOLOGIUMstarted back 2004 and since them,the project has been releasin lot of releases through different labels.This time we presents you "A Handful Of dust and Ashes" A kind of recollection compositions which wer recoded during diverse occasions and gathered especially for this release,with the solo purpose to show us the impressive and unlimited music created by Gregorz Siedlecki.The albums includes a total of 17 compositions in which you shall experience the enigmatic and suggestive world created by HOROLOGIUM. tracks such as " Secret Of The Continent" and its amazing martial percussive elements dressed by some tribal elements and industrial patterns which appears at the whole track from time to time.Through "Ominous Morning Din" ,things goes more oriented into experimental industrial edge,with repetitive elements and harsh deconstructed elements,which transforms the whole composition in a virtual machine full of diverse movements and structures,all of them with a touch of creativity as principal characteristic in HOROLOGIUM.Is worth to note that between mostly of the tracks we shall esperience a track called "Miniature" which is fracmented in 4 arts and complements perfectly with the whole concept in general. "Arma Virunque Cano" is another psychotic industrial piece full of power and suggestive atmospheres,crowned by sutile sounds and some female voices. with "XX Century Alchemy",everything turns a bit different in comparison last tracks.so pinao sounds emerges together atmopsheres and spoken male voices adapting perfectly."opium" is a monumental transformation which gather the essential elements to keep your sences alive all the time.This composition has some thin bells,voices,atmospheres and arrangements which surely will transport you to a narcotic voyage to the center of your own mind.sudeenly the percussive elements emerges to gives a strong feeling to the whole composition.Other tacks you shall explore here are " Adormidero","Let Their Be Night","Absolute"...before al these amazing compositions,you shall experience three live compositions which were taken from live shows in Barcelona and Bologna in 2008 and 2009 respectively. So the first of these live tracks is "Invocation" an enigmatic composition full of such magickal atmospheres and voices and arranged by percussive sounds.surely you will find this release so attracting due the nature in which floats HOROLOGIUM,always mutating,always moving in all directions and bringing new elements to ambient/experimental scene!!! 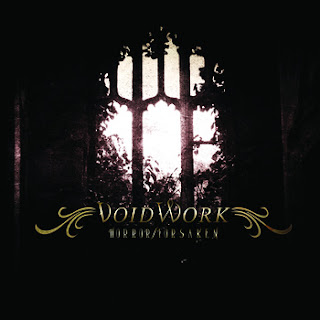 VOIDWORK(Bel)
"Horror/Forsaken" Digipack 2010
(BlackDrone)
When hearing imprsssive and in deep musical album as the ones we have inmind give us motives to work so hard and with dedication,due how each musical transformation penetrates our minds in order to give you visions,thoughts from an artistical level.so with this Belgian project VOID WORK,created in 2008 by Xavier,things seems to be goes orinted into such neo classical atmospheres with impressive sounding like horror movie elements.A very amazing release is what is present here in "Horror forsaken",a double release containing diverse elements and a guest artist complementing perfectly to bring to this existential plane A very interesting album worth to check. "Horror" includes a total of13 compositions built into haunting musical atmospheres which you must explore when hearing titles as "Haunted" a cello based track with such slow and melancholic elements and voices. or just "Marble Steps",a track with an incredible work of synthesizers and percussive elemnts creating a solid but dynamic structure of eerie atmospheres...vast cinematic soundscapes cralws within "Interlude",and more with the impressive use of percussive sounds which empower the short but effective track. An aspect worth to mention at the whole both releases included here is the participation of talented artists as Ann-Mary Thim (Arcana),with lyrics and voices. "insomnia" emanating is ghastly and cold distant atmospheres in a very proper way due how the composition is evolving with pass of minutes. Through "THe serpennt's Lullaby III" ,everything is more oriented into dark,dnese atmospheres and voices crawling from withing the deeps of the track,collapsing themselves and creating an obscure piece here.one of the best compositions included here. Other impressive pieces here are "Forever In Fire","Post-apocalypse","The Descent","Anctartica" and "The Black goat". The use of ethnical instruments and ancient atmospheres is what more attracts you since the first to the last track!! The "forsaken"s part includes a total of 7 compositions with a very mystical ancient atmopshere.for example the track called "Akhenathon",built though the well performed use of acoustic instruments and male voices. "Ghostlight",more dense in itrs own nature in comparison last one ,but still with such interesting element and just perfect work of synths giving such errie atmosphere to the whole composition,also is worth to mention the use of voices in this too."forsaken","Pillars" both of them pieces with high levels in deconstructionism in the way as at every second the track trascends into something new and diverse,bringing apocaliptic scenearios full of desolation and loneliness. "circle" is just amazing,tribal percussive elements mixed with thin sounds,voices,atmospheres. closing the release are "Nightmare" and "Grave".The albums comes in colourful digipack.for more info just visit Black drone's page and check some online samples!!! 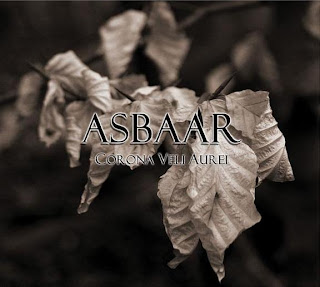 ASBAAR(Spa)
"Corona Veli Aurei" Digipack 2010
(Black Drone)
ASBAAR is an Ambient / Industrial project rising from Barcelona spain,the project is handled by Marc Merinee which is know due its other project called Eldar.This time he proclamates his own visions and personal encounter with his own ancestors searching for hidden wisdom,a wisdom which roots in the deep of our hearts,minds,and spirits. so with ASBAAR ,everythings seems to be an in deep explorations through each one of the eleven compositions developed here. "corona Veli Aurei" is one of such mutative organic forces carved in nature,due how musically it trascends its own spaces to create somethingdense,somber and still creative.Pieces as "Mana" with such industrial percussive patterns and atmospheres collapsing all the time. or just "Agnosia" with water sounds and diverse soundscapes transporting you the hidden mysteries of mother gaia.So a complete collective of soundscapeas and atmosphere all of them offering you amazing tunes and irrational atmopsheres always through such spectral,eerie vacuity generated in the whole tracks included here.The manipulation of diverse patterns at "Pulchrum" and "Fatum"are just clear examples of how much the album improves more and more when passing of tracks...A primordial darkness opening its portals to be explored in all senses!! The whole album is has a visual side inspired under the influence of the photographic visuals of Manel O Company,revealing us the spectral desolation,anguish and desperation of human mind to escape from such relities in which has been chained since Brith. "corona Veli Aurei" is just a free spirit,evolving through aeons and aeons...12 pages booklet in which besides the visual side you shall explore some poems and written structures which goes according the pciture to creates a perfect complement for the whole albumin general."Instinctus" and "Tucsi" are the ones who closes the release,with such dense atmospheres full of cold desolation,where everyhings sems to be an end...but the beginning of something beyond the collective consiousness in which own nature plays an important role!!!ASBAAR delighten us with a powerfull album worth to check out now!!
Posted by PAN.O.RA.MA audial/visual/Magickal Journal at 12:46