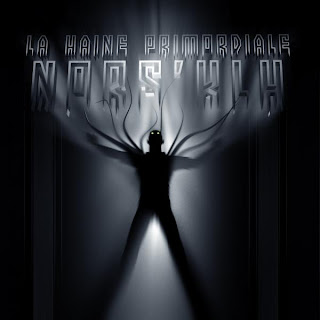 NORS'KLH(Fra)
"La Haine Primordiale"
(Alchemic sound Museum)
Is more than a pleasure to Announce the awaiting new album Of NORS'KLH "LA Haine Primordiale"...A cosmic project whci emerges from the hidden black hole somewhere in the distant dimension,to evoke in deep atmospheres gathered under impressive musicalisation and well structured.I was very impressed by the development of this French project,which in my opinion is one of the best ones coming from such country nowadays.The album opens with an intro in which listner can submerged in dense and floating dismal atmopsheres with such sutile but strong elements which puts you in a kind of cosmic gnostic voyage,and prepare yourself for a long voyage to the center of cosmos where NORS?KLH is the paralell dimension to find your most hidden nature ,through the rest of compositions. Parts I to V ,are such in deep explorations of senses through monumental hymns,and errie transmissions of cosmic nature,always mutating and arranged in a perfect way.spoken voices as transmissions from outer space,rhythmic percussive patters evoking calmness and inducing trance,and atmopsheres surrounded from floating harmonies to obscure soundscapes able to open you new ways of perception.The most impressive of this release is without a doubt the fact how each rhymic pattern and dismal atmopsheres are synchronized together to create a vast piece of diverse elements and vaporous structures weel performed,well arranged and mixed to create a true masterpiece.The use of piano and synths together in Part V,for example is a clear example of the devopment the project has done since the very beginning."Final part",is a different track ranging with furiuous fast drumming elements in comparison the rest of the tracks and guitar elements and a kind of black metal atmopshere which gives to the album a different but interesting touch coz,the music moves in all directions.at middle of this track you shall explore a kind of ritualistic atmosphere,and ends with a period of silence ,a deadly mixture for sure. "Omeno (Requiem) is the last track ,and here NORS'KLH bring us a melancholic opus,a sorrowful composition with such mid tempo druming elements and eeerie atmopshres ready to haunt you and entering to such dimension in which NORS'KLH emerges to raise as a constellation full of hidden knowledge and wisdom to be explored!!!! 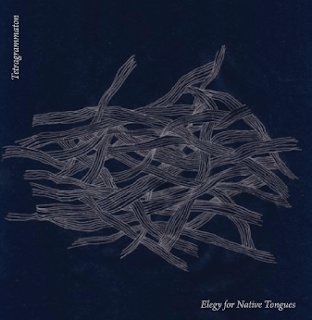 TETRAGRAMMATON(Jap)
"Elegy For Native Tongues" double cd 20o9
(Subvalent)
With Album TETRAGRAMMATON takes a eclectic experimental/inprovisational piece. This psychedelic trio coming from Tokio,Japan.so,they have created an impressive work here ,due how each one of these tracks contains such psycho-addictive tunes,transporting yourself to such vast universes creted thoguh such mimetic ,eclectic compositions.The first cd include 5 tracks opening with "The Ghosts Won't Starve We Will Perish",a long 18 minutes one,of defragmentative tunes and explosive druming elements blasting all the time.Then comes,"Elegy For Native Tongues",coming with sutile acoustic guitar tunes and percussive sounds which appears constantly through the whole track,and such psychotic Saxophone parts go give a more disturbing atmosphere due how the Sax parts are included here.The third one "Kohelet Revisited"is more a suggestive piece with obssessive electronic drone elements.TETRAGRAMMATON has created a trip to unknown dimensions through disturbing moments of harsh experimental noise. "Queen Of The Ships" and "Santa Sangre" complements the first disc with two suggestive pieces including such incledeble spontaneous saxophone tunes and percussive elements as principal basis. Through the second disc we have 3 compositions of a live set recoded in Tokio in 2007. "Oresteia In One Part" is the first one being so dense and ritualistic at the very be ginning,and with the pass of minutes mutating and transforming into a sonic obssesive organism due druming,drone and electronic patterns used here."solve Et Coagula" is just more a dronish exposition of subliminal characters evoking such eerie atmopsheres but still in themiddle of the track such hard noise electronic devices transforming such track in a complete chaotic machine destroying everything to its steps.finally we have " Los Heraldos Negros" complementing the album.An interesting album due how these Japanese trio has included diverse elements as gongs,bels,saxophone,drums,effects to create this eclectic piece!! for more info just check Subvalent recs. 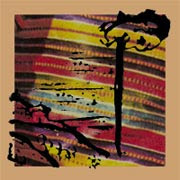 JAHILIYYAH(Jap)
"Anon Nehrut" Digipack 2009
(Soundispatch)
Emanations, conjunctions of abstract forms and inner realities gave birth to Realism, an experimental/psychedelic act which has impressed us a lot, due the high quality of musical development and magickal explorations through each one of the 8 tracks included in this release.JAHILIYYAH is a Japanese project formed by Cal Lyall known for the impressive work at Tetragrammaton,and Ezra woolnough,David Macmahon exponents of the project called Grauss Vom Krampuss.the result to gather such three spirits was just brillant,because they offer us here a piece of sonic desconstructionism with intense moments from start to finish. Just explore the firts two tracks "Teeth Shaters Theme" and "Carnival Of souls" with such twisted drone patterns collapsing all the time,and more with thirrd one "The Grandmother whisperer"adopting some old school industrial traces to the whole track.The forth one "Methuselah"is more a dense ambient one with some minimalistic elements here and there.then arrives two untitled ones,in which everything se ms to be more calm butat moments the drone elements seems to possess the whole structure of the track giving it a kind of subterranean atmopshere due how both tracks are built here.A haunting album with so many elements worth to explore if looking something different,so other tracks included here are "Bloated Infans Smile" and "Celine Slaughterhouse".The album comes in a special package with hand made paintings and includes a mini posted with artistic abstract iamgery.So ,no so much information just to say JAHILIYYAH is sonic,visually,tactually,chemically,emotionally,spiritually… a ritualistic expression transcending the whole senses in a reality in which you are the principal core to the void. 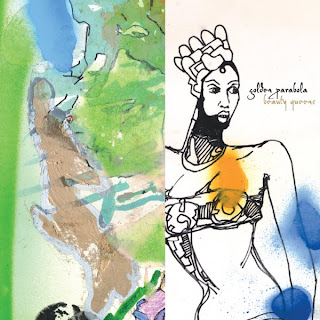 GOLDEN PARABOLA(Jap)
"Beauty Queens" Cdr 2008
(Soundispatch)
Coming from tokio and having as principalHead to Cal Lyall,a creative Canadian guitarrist and electronic musician and member of interesting projects such as Tetragrammaton,Jahiliyyah, unleash part of his creative potential through GOLDEN PARABOLA. With this debut album we find a very dynamic album with diversity of sounds and interesting structures through the whole 8 compositions included here. "Beauty Queens"is built into diverse experiemntal structures bathed with such amazing fild recording elements which keep your senses alive all the time due the way as constanlty evolution of the whole composition.Also you shall hear some kind of stoner rock,and jazz influences through some of the tracks such as "Mama Cluster" and "Wunderkammer".also you shall experience sensitive explorations of sounds in tracks such as "Jasper’s Black Gunion" and "Pompey, Good Night".so its interesting to know how creativity is handled here,always bringing new elements to the tracks to the perfect use of elements such as babylonian drums,clarinet,bass,guiarts,effects,machines and field recordings which are well adapted to the music in general, creating a very interesting musical piece worth to explore.The album comes with an abstract colorful cover dseign which goes perfect acording to the album in general.not so much words here,but necesary to describe the music you shall find here!!!
Posted by PAN.O.RA.MA audial/visual/Magickal Journal at 10:34