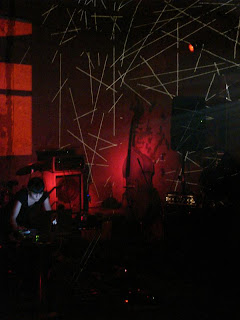 An experimental industrial act based in , sent us their material, and really a very deconstructive exploration of sounds which converges into chaotic dark forms with so many elements worth to explore from time to time. The cdr includes 6 compositions which 4 of them are live expositions and the rest studio recordings. The live tracks are corrosive to the point of collapsing themselves and create new elements which remind me a bit to the Swedish masters Brighter Death Now in the use of reverberations and other effects included here. The deconstructive way as SCHRIFTFISH generates each one of the corrosive experimental tunes here are just amazing due the chaotic nature of each one of them. The 4th track is a studio recording which is built more into dense drone elements surrounded by a kind of futuristic experimental touch which suits perfectly the whole nature of the track in general. So will be great to hear in future of this interesting promising act coming from Germany, so the potential is there ready to be explored in its maximum level. For more information just visit the page in order to hear the abstract reality created by such experimental /industrial/ambient project!!! 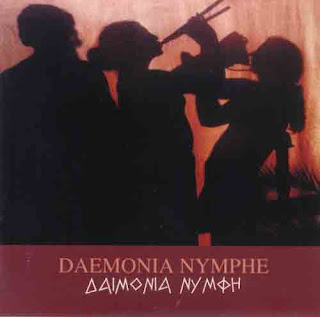 Formed in the year 1994 this pagan horde arrives with their brilliant debut album in which you shall be illuminating by the splendor and beauty of the Hellenic ancestral past, through beautiful melodies which transport you back in time to ancient . The use of replicas of the ancient Hellenic instruments makes an extreemely, incredible production from start to finish. Tracks such as "Message Horns Enchanting Echo" with suggestive wind melodies dressed with bell and the enchanting atmosphere opens the album. So then appears beautiful expressions in tracks such as “Idas Dactyls" with its amazing Hellenic spoken voices and percussive elements.” Summoning divine Selene" is almost in the same vein but this time the splendor continues through spoken female voices in Greek, chorus and melodies surrounding the whole track."Hades”,” Dance Of Satyrs" are both evocative hymns of ancient Hellenic gods, its twisting beautiful melodies and expressive nature are just perfect.A plethora of musicians participate besides the basic core of the band, among them a famous Greek singer Alkinoos Ioannides.The result was this amazing debut album, which continues with tracks as “Korai Rejoicing In Antron","Nymphs Of The Seagod Nereus" being the second one an immerse paganistic expression of ancestral elements inviting you to go dance naked in the woods, drink wine and search for your inner Dionysian spirit!!! "Hymn To Bacchus" is a track built into sticking percussive elements and great work of voices, chorus and melodies gathered especially for this composition. And closing the release is "Invoking Pan”, emerges as a beautiful enchanting track though diverse instruments, as flute, percussive elements and atmospheres penetrating your mind all the time, a voyage to the core of ancient Hellenic past in its most pure form!!! IO PAN!!! 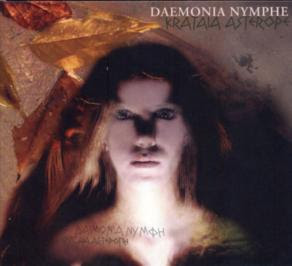 Again DAEMONIA NYMPHE surprises with another excellent release, this time the last album released last year, in which they continues with its expressive exploration of diverse elements involved the Hellenic tradition, myths and mythological aspects through a pagan vision, represented perfectly through each one of the 11 compositions included in "Krataia Asterope"... the evocative, sensitive way each track is built is just perfect. Beauty melodies, spoken voices in Greek, rhythmic percussive sounds are just few of the diverse elements you shall experience when hearing this album. "Nocturnal Hekate" appears as one of the best tracks here. The work of voices suits perfectly the whole atmosphere created by the diverse string instruments and sutile female chorus picturing the whole composition in General. Note that DAEMONYA NYMPHE has performed in many countries worldwide, giving an ancestral message to the modern world in which we live."Divine Goddess Of Fertility" appears as a piece of neofolk surrounded by just emotive female chorus and calm atmosphere.” The Goddess Mnemosyne" is another brilliant composition, built with so diverse expressive elements and voices which dwells within the pass of minutes. An evocative hymn, in which you shall experience why DAEMONIA NYMPHE is considered nowadays as one of the best acts inside the neofolk/pagan scene, recreating the sound of Greek Antiquity to bring us such perfect expressions through an audible form."Hymeanos" and "Ecstatik Orchesis" closest this album through fine, sutile atmospheres filled with the charisma which characterizes DAEMONIA NYMPHE, with its unique sound, but this time focusing more into neofolk elements!! 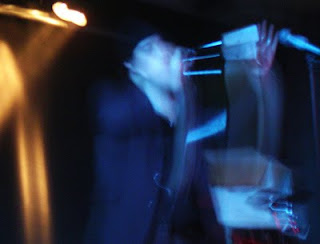 A new brilliant star rising in the horizon is what emerges when from we explore the brightness of such star and we find that UNEXPLODED is such star. In the shape of Spine, this wave/rock pop act surprise us with an advance of the upcoming album, offering a complete facet of his skills as musician though 5 compositions in which you must have a clear idea of the upcoming album. Opening the album is " Invert" an interesting exposition of sutile melodies covered with interesting sticking elements floating in the whole track, and a very well performance of vocals going according the music in general. Then, comes the second track "Shiny Glass Eyes”, a composition with different elements here and there with built under a similar structure as the last track, but this time with amazing work of synth and voices effects to create another perspective in the way as the track is reflected here. Through the third one called " Unavoidable(greed)",a more aggressive atmosphere is exposed to its maximum level, with sticking work of bass and guitar parts which are surrounded by the almost perfect voices of spine and such rhythmic patterns around the whole picture of the track. One of the best tracks here.” Floater" and "Bitchlapping A Cocodrile (Gated) closest this promo,so,the first one a more mid tempo track with synth elements and voices going around the whole picture of the track, slow and emotive with a psychedelic touch perceived by mi mind is what I must mention here. And the other track is just brillant, perfect, going in equilibrium with the whole concept in general, the voice here is incredible great, and the use of certain atmospheres and percussive elements give you more reasons to be anxious to hear the final album. So just let to be blind by the brightness of such unexploded star shining at the horizon.